Alhamdulilah, this school year has been quite a learning experience. I spent the first half of the year convinced I had no idea what I was doing, and the second half of the year feeling more confident. Except for history.

History has been such a struggle.

There seems to be two camps when teaching history:

1) Teaching the way we were taught in American schools growing up. We learn that Columbus encountered the Americas, sparking a period of exploration and discovery. There is little talk of what happened to the native communities, and the few native Americans that are named are done so in the context of how they helped colonists.

2) We teach the atrocities and mass slaughter that were done at the hands of the explorers, naming specific people and the evil that they spread.

I realize I’m in the minority here with trying to bridge between the two. I want to explain why. 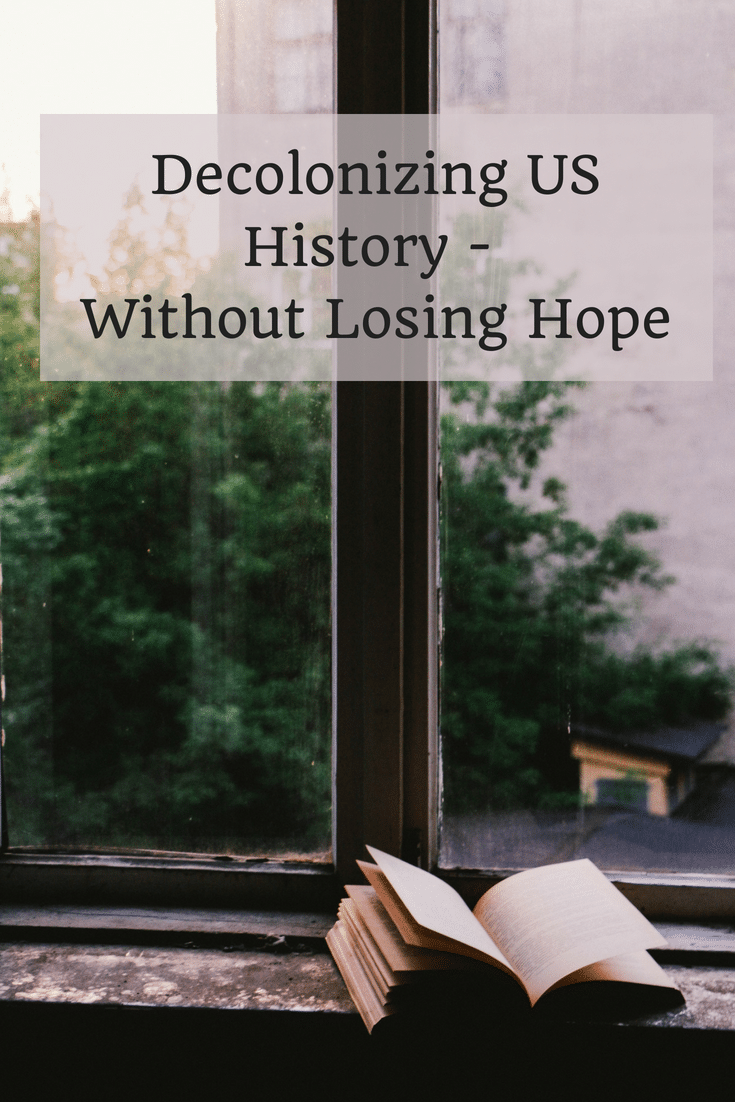 One belief I have that has kept me rooted from falling into camp #2 is that I want my children to grow up with a worldview of hope. I want them to start their learning years hearing about great men and women that shaped the world we are in today. I want them to look up to people that invented, that created, that nurtured others. I want them to see the good things they can do in this world and I want our study of history to help form that worldview.

Secondly, when you are starting out with pre-colonial Americas with form 1B (grade 1), there are widely conflicting accounts. How we choose to handle those accounts largely speaks to our personal biases, which I believe our personal biases need to be removed from teaching history, other than possibly amplifying voices that are otherwise muted in our mainstream teaching of history.

Unfortunately there are little to no books that offer this middle perspective, but I have found some that make this conversation a bit easier.

In sha Allah (God willing) I’ll be updating this list over the years. So far we have covered history up to Pilgrims coming over on the Mayflower

A Little History of the United States

I personally really love this book, but to be honest, my 1st grader doesn’t find it as interesting as I do. I think it’s a bit dense for her still, but I could see us using this as a spine in the future. There’s a lot of context given in this book for various historic events, such as the reformation in England being a contributing factor to exploration and people moving overseas. When we get to historic figures that are highly contested, he skims over it offering some perspective from both sides but not diving into the details. At age 7, I’m perfectly okay with this. We literally have 11 more years to talk about it, and that’s not even including college and continued learning as an adult. At this age, I’d rather give less details about a contested account than the wrong details.

The Book of Indians

The only reason I gave this book a chance is because it is written by the same author as Paddle to the Sea and Minn of the Mississippi (which we are currently using for Geography). Given it is written in the mid-20th century, I didn’t have high hopes for it, but I got a copy for somewhere around $4 and I heard good things about it, so I figured what’s the harm?

In the introduction he says that he and his wife went to live with the various native communities across the United States, taking in their stories and making his book from that information. The book is divided into the different communities and he chronicles what life was like within these communities, generally focusing on a child as the main character in each story.

This book teaches more about culture and lifestyle and less than about specific events, but does dispel the myth that native nations were all hunter gatherer societies that had not developed into anything significant.

One more note on this book – get the vintage book. The reprint of this is unusable.

This series is a bit new to me, but by reading through The New Americans: Colonial Times, and a recommendation from a friend, it looks like a good fit. There is a lot of information in these small books, so it would be good to stop and read about some of the people mentioned, but the illustrations and writing style are engaging. Another option would be to read it as a summary when you finish reading other books for that time period.

A good picture book about the first Thanksgiving, and written by a well regarded author, Joseph Bruchac. He has chapter books that detail Sacajawea and Pocahontas as well that are suitable for middle school age.

Linked above is an ultimate guide to homeschooling with biographies. Again, look for a non-biased perspective when possible. Teaching the stories of people is a powerful way to understand history and all the sides that go into the story we tell.

Books that can be useful, if filtered or adapted

There are some stories in here that really help paint a picture of life in the pre-colonial era and the people that were influential. I do like that more people are mentioned in this spine than other books I’ve encountered, which helps me then dig into finding biographies or piecing together information as the stories are told. I do not recommend the story of John Smith from this book as it sounds downright like a fairy tale with his “heroic” ways.

Still, for less than $3 for the Kindle version, it’s worth having on hand. No other book talks about the lost colony of Roanoke and other events that are usually skipped over.

What I’ve read so far from the d’Aulaire books are Leif the Lucky, Columbus and Pocahontas, and of these three the one I do not recommend Pocahontas. (Basically the only Pocahontas story I’m comfortable with is from A Little History of the United States.) Columbus for sure needs some editing as you’re reading aloud, and discussion after you read it, but it is engaging and is not hard to adapt.

The value in adapting books

If a book is not what you need from it, why use it? I find it valuable for kids to see that not all books tell the truth, or they may skim over the truth.

One perfect example is in the Columbus book where it says that Columbus put the Spanish flag on the beach where they landed. No other mention was made to this action, but we stopped and discussed what the native Americans would think about that, and why Columbus felt he had the freedom to claim this island for Spain.

Books are written on nearly every subject imaginable, and each one has an author that has their own biases and their own limited knowledge on the subject. We should take each book with the understanding that it is inherently flawed in some way. Each resource must be approached with a questioning mind, with a curious heart, and with logic to find the inaccuracies.

Using a flawed book, and talking about what flaws we see and discussing them helps our children build critical thinking for when they are reading books on their own. Show them how to question, and what to do with those question.

Even with valuing a flawed book, I suggest obviously flawed books are in the minority, by far.

Please share any book suggestions in the comments below! I’m always looking for new resources!

Summary
Article Name
Decolonizing US History - Without losing hope
Description
I want my kids to know the truth, but I don't want them to build a worldview that everyone is evil. Where's the middle ground?