February has been fun, alhamdulilah. It’s been unseasonably warm, which makes me concerned with how summer will shape up, but for the moment it’s been enjoyable and it’s been easier to get out and do things with the kids. While inside things like the Children’s Museum are always available, it feels like less of a chore if I don’t have to bundle the kids up from head to toe!

Getting on top of housework

I hope to have a full post or a Periscope broadcast about this at some point, but my increased priority on homemaking has pushed blogging to the side during the day. How some moms do great at both has me in awe.

Anyway, with the new year I was of course tempted by all the new 2016 planners, but I know myself and that I don’t like to have to fill in all the blanks, or to have half of it empty. It feels like a chore to keep it filled up. I had heard about bullet journals and figured I’d give it a try. You can watch a video on How to Bullet Journal (also directly below) to see the full setup. I don’t do any of the indexing, but rather just use the daily list part, at least for now, and I got a regular to/1XnxHYd” target=”_blank” rel=”nofollow”>blank journal rather than their “specialized” journal.

Secondly, I’ve added to our Easy Peasy Chores with weekly tasks. We’ve previously been using the morning/evening routine and table time cards, which has been great to help the kids take responsibility with helping out around the house. Now I needed a reminder of simple chores to do each week, in sha Allah. I don’t clean the whole house in only one day each week, and honestly, I can’t get to it all in a week, so I have Week A and Week B that I switch back and forth from to get to the whole house within two weeks, if all goes to plan.

Just these two simple things has made a huge difference with how I’m able to keep on top of daily chores, in the form of housework, errands, following up with bills or phone calls, and anything else.

Continuing with my homemaking goals from January, I’m trying to make more things from scratch for a couple reasons:

This month I tried a few new recipes:

February seemed to be the month the girls were back into book work. After not touching most of our toddler-and-preschool-curriculum-and-book-lists/”>curriculum for months, we seemed to touch on all of it in February.

I believe part of this change also has to do with the fact that I’ve tried to maintain a more predictable rhythm to our day. I’ve told the girls that if they would like to do school work, we can do it after lunch. Other times in the day are reserved for other tasks.

This last month we started reading to/22bo7hS” target=”_blank” rel=”nofollow”>365 Days with the Prophet Muhammad (sws) each night before bed, and that has fostered more conversation about what is sunnah, and how we can try to emulate the Prophet Muhammad (sws) in our every day lives. This seems to have given way to more enthusiasm with other Islamic studies as well, even practicing numbers and colors in Arabic, which has never had much excitement behind it.

After getting the idea from Noor Box, and finding these Islamic virtues online for free, we’ve started a virtue of the month (or however long we spend on it. It’s not on a specific calendar). When I introduce a new virtue, we talk about how Allah has mentioned this virtue in the Qur’an, how the Prophet (sws) displayed this virtue, and we try to think of ways we can act out this virtue in our lives as well. It’s been fun and casual, alhamdulilah, and I look forward to continuing it. 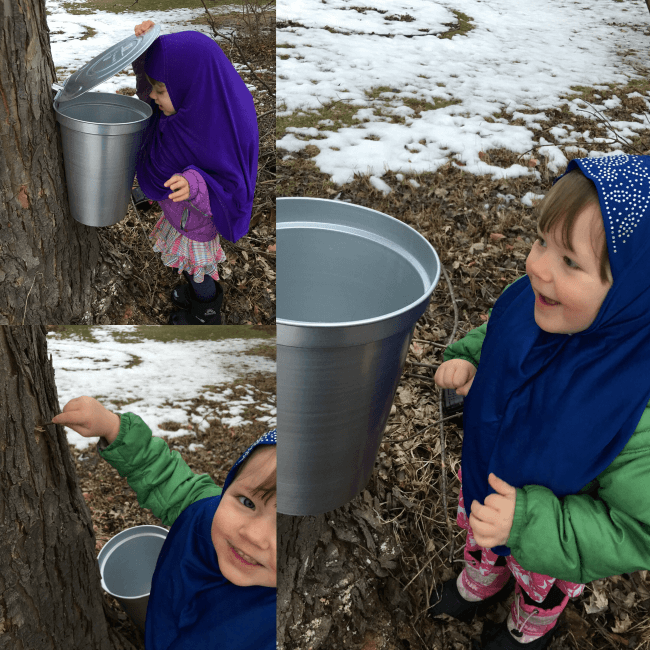 With February warming up so quickly, we were able to tap our maple tree, and in the coming weeks I’ll share with you our maple sugaring (turning sap into syrup) adventure.

March is already feeling as warm as April or May usually is, so this nature study bug is growing strong, and I’m excited for what is ahead, in sha Allah. We have some fun programs I’ve signed the kids up for through the local parks over the next couple months, so it’s starting to feel like my homeschooling dream – a free schedule and lots of fun stuff to do!