Middle Way Mom uses affiliate links in posts and sidebar ads. Please refer to my Disclosure Policy for more information.
You are here: Home / Eco-Friendly / Cloth Diapers / How Many Cloth Diapers Should You Buy?

So how many cloth diapers do you need to buy? Obviously, you need enough to not have to wash them twice a day, but you don’t want to overspend on diapers you’ll barely ever use. A good rule of thumb is you should have enough diapers to get you through at least two days, if not three, and plan on washing every other day. We’ll talk about washing routines next week, inshaAllah, but just think of the longer you take the wash them, the harder they are to get clean. 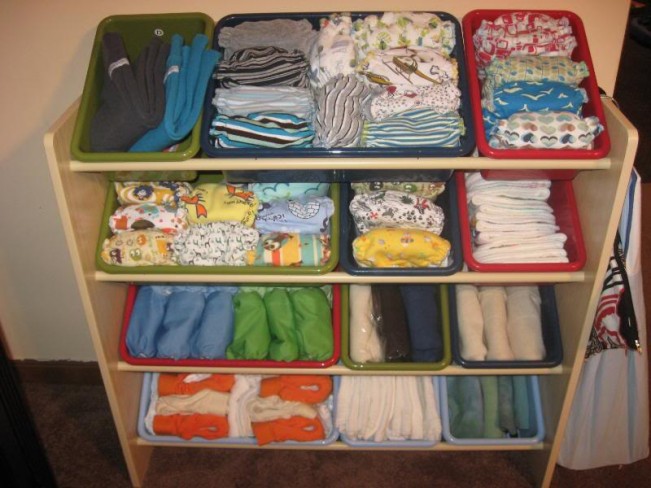 The math becomes easy at this point: about 12 diapers a day for a newborn, and about 6 diapers a day for a toddler. Some people choose to buy different diapers for different occasions. For instance, the Flip diapers are great around the house, but I’ve heard that if you go to the playground the insert can bunch up and the child can pee out the side. Or if your child will go to a babysitter or child care who is not necessarily cloth diaper friendly, you definitely don’t want to pack prefolds or flats even if those are your favorites to use at home.

If you choose a diapering system that has separate inserts and covers, you need about half the covers you do as the inserts. Many times you can rinse out the cover and hang dry it and use it again before washing it in the washer. Obviously, if you have an AIO (all-in-one) system, you have to buy the full diaper for each change.

At night you will likely need a booster, and if you have a heavy wetter you will need a booster at naptime also. Though you really only need about 3 boosters for night time only, most people buy about half a dozen. I have some Grobaby/Grovia boosters, and I also use the preemie tonbabies.com/product_info.php?cPath=28&products_id=277″>indian prefolds for night time boosters. There are a number of parents that use disposable diapers at night since they are so incredibly absorbant too.

A diaper pail and wet bag for traveling are necessities and everything beyond that is bonus. A diaper sprayer is very nice to have, and you can make one from some supplies at your local hardware store, using the water supply that goes to your toilet. Reusable large wet bags are made to use inside a diaper pail and are nice to keep down the garbage you’re creating. Some diaper companies offer liners to put in between baby’s skin and the cloth diaper, which helps with clean up of a messy diaper. There are a number of accessories, and more created all the time but the last I’ll mention is cloth wipes. Honestly, these are so easy to make, I don’t see much point in buying them myself, but they are available.

I hope that helps you understand what you’ll need when starting to cloth diaper! I’ll leave you with the stash I have at home: