In our preschool curriculum, we use Before Five in a Row as a core component, and as with many other homeschool resources, there is a Bible component included. Since there aren’t any Islamic publishers that cover core subjects (math, literature, science, etc.), having a Bible component is a reasonable alternative so we can use the ideas to include our religion in these core subjects, too. 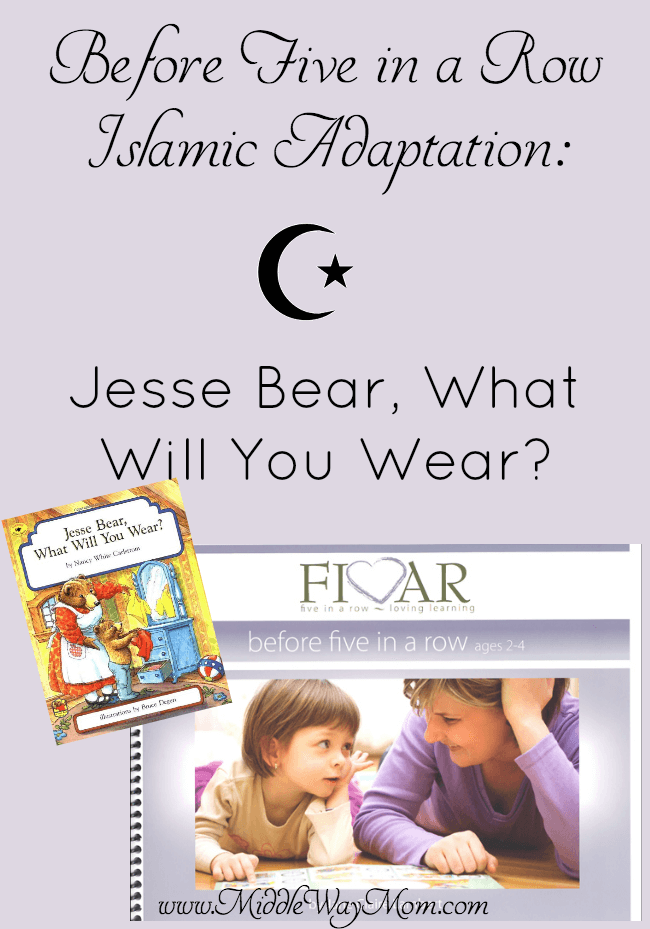 In the lessons for the book Jesse Bear, What Will You Wear?

, the Bible section suggests discussing a verse about being cheerful. I’ve compiled a few ayat (verses) that touch on the same subject:

Allah ordained this only as a message of good cheer for you, and that thereby your hearts might be at rest – Victory comes only from Allah, the Mighty, the Wise [Qur’an 3:126]

Messengers of good cheer and of warning, in order that mankind might have no argument against Allah after the messengers. Allah was ever Mighty, Wise. [Qur’an 4:165]

And here’s just one ayah we can point out that talks about clothing (emphasis my own):

O prophet! tell your wives and daughters, and the believing women, that they should cast their outer garments over themselves (when outside): that is most convenient, that they should be known (as such) and not bothered: and Allah is Oft-Forgiving, Most Merciful. [Qur’an 33:59]

See the point above about how hijab shows we are Muslims to those around us. We want others to know about our decision to please Allah!

Jesse Bear, What Will You Wear is such a fun book to read aloud with a preschooler because of the rhythm and rhyme. We use rhythm and tone to beautify the Qur’an as well.

Listen to some Qur’an, especially a surah that has a lot of repetition like Surah Qariah and notice the rhythm and rhyme. Allah made it beautiful to listen to. Did the author try to make the book beautiful to listen to as well? The Qur’an is superior, but it’s fun to use the words Allah has given us to make rhythm, too!