Have you ever wondered how many liquid soap containers you’ve thrown away? Or how many empty bean cans are in the trash from your home? What about oatmeal packets?

Sure, these things are recyclable, but the manufacturing process to make them is still impactful to the environment. And recycling isn’t a perfect process either.

Wouldn’t it just be better to cut out the middle man and make some of this stuff yourself? I mean, how hard could it be to make your own? Plus, working toward self-sufficiency is never a bad thing. 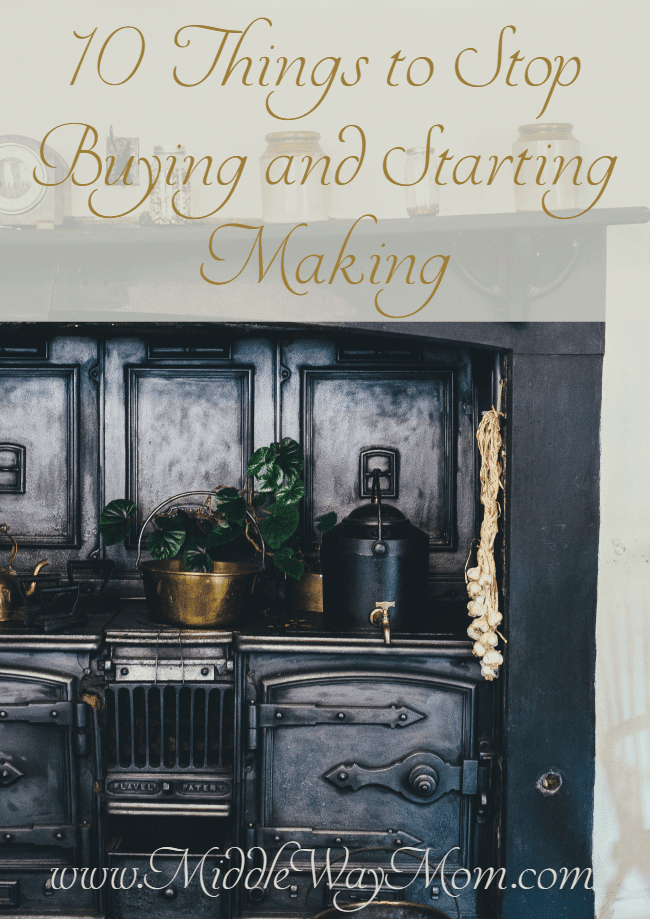 Ever since I started with cloth diapers over six years ago, I’ve explored quite a few make it yourself ventures, both for the sake of saving money, and to reduce my environmental footprint. Here are ten items that I now have stopped buying entirely, and I believe they are ridiculously easy to get a newbie started.

Books are linked at the bottom of the post.

With simple castile soap as the base for both of these recipes, you can make your own soap for pennies on the dollar, refilling bottles you already have. I did buy a foaming hand soap dispenser because we switched from bar soap, but otherwise we just reuse containers we have already on hand whenever possible.

I will suggest with the body wash recipe to dilute it more in water than what the recipe suggests. I think it still works great, and it makes it go further. Plus, if you use peppermint castile soap, it can feel a bit chilly without diluting it.

I can’t believe I’m saying this because for years I kept trying eco-friendly dishwasher detergent, and being terribly disappointed. I’m not okay with all my glasses being cloudy in the name of being more eco-friendly.I don’t know about you, but I don’t want friends to wonder if my dishes are actually clean.

The base for this is simple washing soda and citric acid. The price compares to a (not very effective) store brand dish detergent, but it works far better and you get to bypass the chemicals both for your own sake. Plus the water you’re putting back in the system isn’t ridden with chemicals.

I hate making breakfast. My kids aren’t yet old enough to reliably make their own breakfast without making a giant mess, but instant oatmeal is something I can do in the morning.

The downside to your typical instant oatmeal? It’s full of sugar and doesn’t keep the kids full for very long! An hour later my kids are asking for something more, just as I’m getting the kitchen clean. Ugh.

I tried a couple instant oatmeal recipes, but I like the DIY Pantry one the best. I add hemp hearts and flax meal to give it a bit more bulk than a typical instant oatmeal, and the raw sugar added keeps the kids happy.

This isn’t my favorite thing to put together because I’m pulling a lot of things out of my pantry to make it happen, so I got a 16 cup Rubbermaid container and I make a large batch to have around for a couple weeks.

Have you ever seen the price difference between canned and dried beans? It’s crazy! I will admit that I’ve tried cooking dried beans many times and basically gave up until I got the Instant Pot. Pressure cooking beans is super easy, fast, and takes all the work out of turning crunchy dried beans into something edible.

I’ve started making about a pound of beans at a time, then keeping some in the fridge for cooking and using some of the leftover cooking water in containers to freeze the rest.

The US has imported so many various flavors and recipes from around the world, but preserved lemons are still quite unknown in most circles. When making preserved lemons, you get a thick, concentrated lemon juice, plus you can cook with the lemons themselves, and they are amazing. Sometimes when I need lemon juice, I’ll just rinse off one of the lemons themselves and throw it into the dish while it’s cooking to get a fuller flavor.

The short story on how to make lemon juice? Stuff a bunch of lemons in a jar with a ton of salt, wait a month, and ta da! Preserved lemons sitting in lemon juice.

Now if you’ve started making preserved lemons, preserved lemon hummus is quite the treat. Plus, if you’re cooking your own dried beans, hummus is a snap, and super cheap! Garbanzo beans, tahini, miso paste, oil, and your preferred spices in a food processor make the best hummus, and you can adjust it to your taste. Tahini and miso paste can be found on Amazon, if that’s hard to find in your area.

In addition, it apparently freezes well (I’m trying this now), so again, you can make a large batch and keep some for later.

I haven’t tried making my own tahini yet, but in order to save the jars of tahini, this can be a next step, and looks very easy to make, in sha Allah.

Minnesota winters make chap stick a necessity, and with kids, those sticks get lost or used up pretty quickly. I was surprised how few ingredients we needed to 10 sticks, and to make it extra special for my girls, we added some cocoa powder to give it a little tint.

The empty tubes are available on Amazon for really cheap, and since they are reusable, they should be the last tubes you need to buy, reducing your plastic waste over the years. If you’re planning ahead, of course you can keep your own chap stick tubes to refill, too.

I’d never tried lotion bars before, but they have been great to get the kids using lotion without making a huge messy or ending up with super slippery kids. The advice given with the recipe is to put them in empty deodorant containers, which make this super easy to travel with. When I was going to the gym, I would bring one with in my gym bag.

Both diaper cream and petroleum jelly use crude oil as an ingredient, which is not a renewable resource, and is being resourced in more and more dangerous ways. Plus, if your child has sensitive skin, you could be using a lot of cream, and all those little containers add up. Either one of these creams whip up really quick and are really effective!

Favorite make it yourself recipe books

Things NOT to make yourself

Three things I have tried to make myself, but did not work well enough to continue:

Do you make anything else yourself? What’s your favorite item to start with?

Summary
Description
Have you tried to make your own homemade staples? Cut costs and unnecessary trash with these do it yourself household core items.