Cloth diapers are admittedly harder to care for when you have hard water. We haven’t gotten our water tested, but it seems to be about one step up from well water. We don’t have any plans t0 get a water softener, but with the trials we’ve experienced washing the cloth diapers, I’ve been mighty tempted quite a few times!

What have I learned in the last year and a half since we moved to this home?

The water is the main problem, so extra rinsing won’t always do the job. As long as the diapers haven’t built up residue of detergent or pee, pouring more water through it isn’t going to solve anything. Trust me… I’ve tried darn near boiling the diapers (I melted a wet beg in the washing machine on accident!) to get rid of build up at one time.

Use bleach or hydrogen peroxide 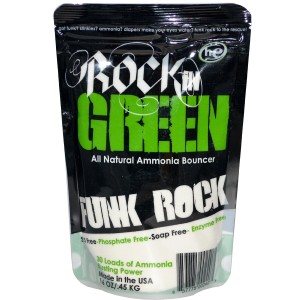 I’m not a huge fan of Rockin’ Green’s detergent, but their Funk Rock powder has saved my diapers more than once. We actually had Little Miss in disposables for months until I came across this stuff! At that point the diapers had such terrible build up, it took a few wash cycles to really break through it, but Funk Rock was the only thing that worked – not dish soap, not bleach, not super insanely hot water, nothing else.

I have a very specific wash routine, and if it isn’t followed, there is definitely a difference. I rinse the diapers by hand before putting them in the diaper pail, then when a load is ready I do a soak cycle, sometimes with hydrogen peroxide or even Funk Rock if it’s necessary (which is rare), then hot wash with bleach and extra rinse cycle.

I’ve also heard Calgon is great for hard water in all your laundry, especially cloth diapers. I ordered some and got it today. In sha Allah I’ll comment on Facebook and Google + how it works out!