I have dreams of growing our own food in our yard. The kids help water the plants and harvest, and I set up the garden with the right crops, and all goes well. For over a quarter of the year we enjoy fresh produce from the fruits of our labor, and I preserve enough food to let us enjoy it for months after the first frost.

Well, that dream has not come true as of yet. I have a lot to learn.

I tried a garden once. The broccoli went to seed (I guess it’s not supposed to do that?), the green beans were eaten by the neighborhood rabbits, the potatoes and peas were overshadowed by the neighboring wild flower mix I planted, and the zucchini just never really did much of anything.

The kale survived, though! I’ve learned kale survives everything. We ate a lot of kale that year.

So, through my various failed attempts at gardening, I’ve learned which plants can handle my brown thumb. From here on out, I’ll be trying one or two new plants each year to learn how to garden, but if you’re in my same shoes (muddy, with little to show for it), here’s some plants to help you feel successful in your gardening adventures. 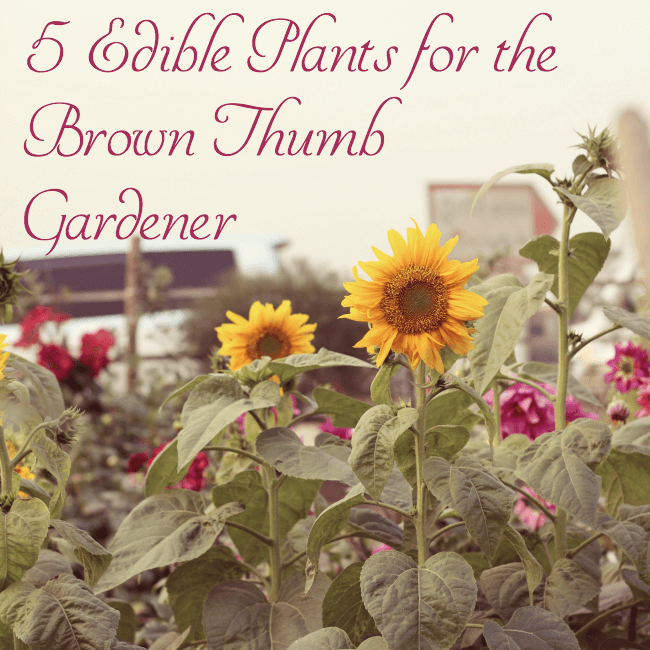 We bought our current house and basically neglected the rhubarb plant we inherited for an entire year. At the end of the year I cut it back, but we never watered it, pulled weeds, or anything. The following year, it grew as if we had cared for it like a newborn baby and we were harvesting rhubarb like crazy.

Rhubarb can handle some shade, and is not fussy. It’ll keep getting bigger each year, so even if you aren’t getting much right away, give it some time and you’ll enjoy that tart taste of summer soon!

Remember my ultimate failure of a garden? At one point I just decided to stop going out and watering it. I figured just let it all die off. Who cares. The kale never stopped producing! Even after the first snow fell, I had a green kale plant poking out of the white blanket in our back yard.

I’m not a huge kale fan, but I like being successful, so I’ll plant one, and find recipes to hide kale in to benefit from it. Win-win.

Back to the house we bought a couple years ago. We thought they planted decorative grass. It was so pretty! And then the pretty purple flowers the grew from it – even better! Lucky us!

Then we learned they were chives, and once it goes to flower, it spreads like wildfire. We are still trying to cover up the giant chive bed to get a handle on it!

Again, chives aren’t picky. We didn’t water them, and they are growing in partially shaded spots. My tip is just not to let them go to seed otherwise you won’t be able to get a handle on them when they start growing and spreading. I dug up a patch and put it in a pot and have all the chives I need.

I like mint anything. Mint in my hot chocolate, mint in my smoothies, mint ice cream, mint chocolate… I could go on forever.

Mint is similar to chives in that it will spread like crazy, but mint re-roots as it spreads out, like a vine, so make sure to keep it in a container otherwise the grass in your yard will have to fight off the mint.

I first grew mint on our deck the same year of my epic garden failure. It was on of my few successes that year. This year I will be growing mint in my mostly shaded kitchen window, but since I just found some mint growing under the landscaping fabric I put down a few weeks ago, it should be fine. We shall see.

Lastly, another plant we discovered in our new yard, and ignored for a solid year without any negative impact. Lavender isn’t used as much in making meals, but it’s a great addition to tea. Plus, if you’re interested in the world of herbalism, lavender is a great medicinal herb. Simply making a strong tea with lavender and adding it to your bath is a relaxing way to use this hardy herb.

I can’t say that I have a lot of knowledge of gardening – yet. So far I’ve killed more plants than harvested, but if I can keep these plants alive, so can you!

What are your favorite hardy plants? Perennials are a plus!