Middle Way Mom uses affiliate links in posts and sidebar ads. Please refer to my Disclosure Policy for more information.
You are here: Home / Homeschool / Back to School! Our First Day! 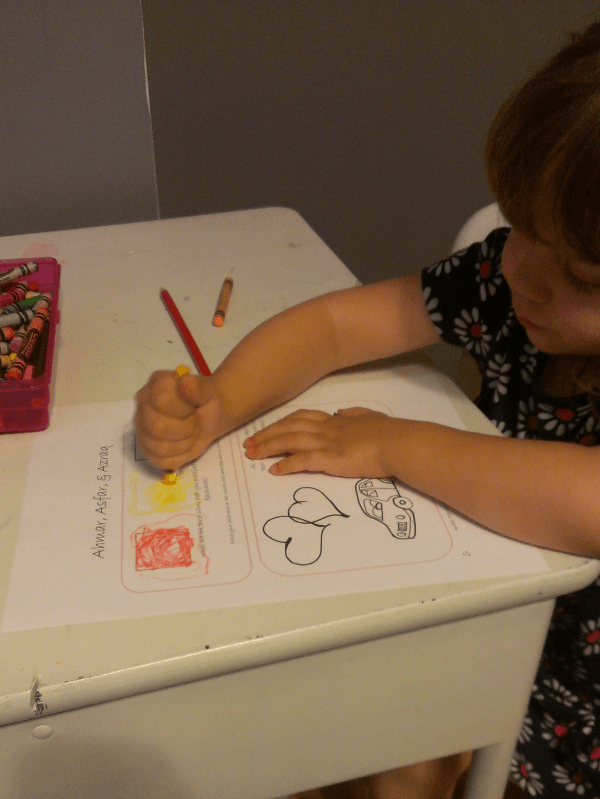 It’s our first day back to school! It’s funny how even for homeschooling, there’s a bit of buzz in the air. The books were stacked and ready to go (okay, the ones I’m done lesson planning at least!), the schedule for the upcoming week was completely setup in Homeschool Planet (more on that in the future, in sha Allah), and lapbooks were printed out for the week.

This is the first year I’ll be incorporating Aamina into a regular school-ish routine. Aamina loves doing lapbooks, and ever since she learned that lapbooks are school, she loves doing school, too! We’re tying in lots of different resources for her preschool, but letting her take the lead in what she’s ready for, and when. After all, she won’t be at the age to start Kindergarten for two more years, so there’s no rush. SubhanAllah, this feels so different than when Kira was this age and I felt immense pressure to have her “schooled” before she reached her first day of Kindergarten. Honestly, I know part of it is that I’m no longer considered a teen mom, so I don’t feel I have to go above and beyond to prove I’m worthy of being a parent.

This year Kira will be going to the local middle school for her science class. At first I was super excited about this being off my plate, but after visiting the school for orientation, I’m a bit more hesitant to be excited. The last time I stepped foot in a middle school was when I attended one, and the view is much different as a parent! I get that not all families have similar values and requirements of dress code, but I forget how many differences there are for parents raising teens. Kira’s fencing club is diverse, but it’s still a much smaller crowd. In sha Allah it’ll work out great.

It’s fun how everyone, both traditional schooling families and homeschoolers, are excited for the new year, almost like New Years in January! I just put up the TV Tickets in our new home (finally… it’s only been three months. Yikes!), laundry is going, and we’re starting off on a good note. Alhamdulilah, a new school year in a new house. It feels great.

This year was also the first where I sat down with Kira and really walked through her various classes and laid out expectations in one sitting. In sha Allah it proves more beneficial than my piece-meal approach in previous years. Also, we’ve talked about how last year was tough, and this year will be a vast improvement, from both our sides, to make sure she has a positive school year. She has a full schedule with three outside classes (one at the middle school and two online), a class with her friend at home, and trying to find time for her to join us at our Muslim homeschool group. We shall see how the schedule works out. If the middle school schedule becomes too cumbersome, we can also opt for an at-home option, even with its hefty price tag.

What does your first day of school look like?