Are you on the fence about whether or not it is worth your time to read the original Charlotte Mason Home Education volumes?

You’ve probably heard they are not an easy read. With antiqued language and grammar, it’s definitely something you’ll need to curl up and get settled in.

But I can tell you, no matter what homeschooling philosophy you follow, you’ll find enrichment in it.

In order to convince you further, I’m compiled 15 of my favorite Charlotte Mason quotes from Volume 1, Home Education. I’ve only read Volume 1, and am currently reading Volume 3, School Education, and so far Volume 3 does not compare to the first volume (I’m told it picks up later. I’m hopeful.).

The first book is filled with golden nuggets of wisdom and epiphanies, so if you’re short on time for reading, just commit to Volume 1 for now. In sha Allah as I work through the rest, I’ll share if others are worth the effort for the everyday homeschool mom. 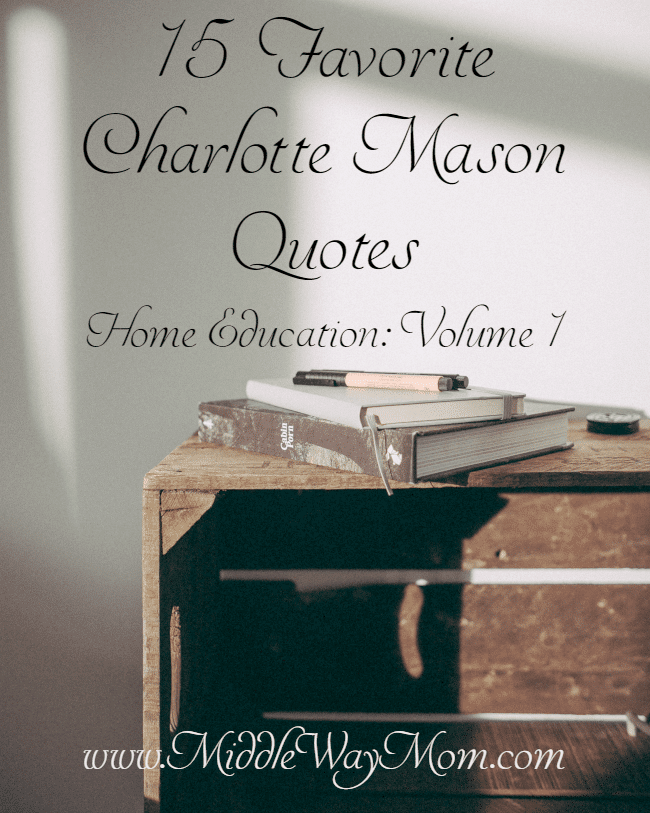 I also want to share how hard it was to get down to 15 quotes. I highlighted my Kindle book all over the place, and originally planned on this post only sharing 10 quotes, but I just couldn’t chop out any more than what I did.

Deal with a child on his first offence, and a grieved look is enough to convict the little transgressor; but let him go until a habit of wrong-doing is formed, and the cure is a slow one; then the mother has no chance until she has formed in him a contrary habit of well-doing. To laugh a ugly tempers and let them pass because the child is small, is to sow the wind.  pg 19

for of the evils of modern education few are worse than this – that the perpetual cackle of his elders leaves the poor child not a moment of time, nor an inch of space, wherein to wonder – and grow. pg 44

The cerebrum of man grows to the modes of thought in which it is habitually exercised.  pg 116

This is one of the rocks that mothers sometimes split upon: they lose sight of the fact that a habit, even a good habit, becomes a real pleasure; and when the child has really formed the habit of doing a certain thing, his mother imagines that the effort is as great to him as at first, that it is a virtue in him to go on making this effort, and that he deserves, by way of reward, a little relaxation – she will let him break through the new habit a few times, and then go on again. But it is not going on; it is beginning again, and beginning in the face of obstacles. The ‘little relaxation’ she allowed her child meant the forming of another contrary habit, which must be overcome before the child gets back to where he was before. pg 121

In the first place, never let the child dawdle over copybook or sum, sit dreaming with his book before him. When a child grows stupid over a lesson, it is time to put it away. Let him do another lesson as unlike the last as possible, and then go back with freshened wits to his unfinished task. pg 141

Of course, the most obvious means of quickening and holding the attention of children lies in the attractiveness of knowledge itself, and in the real appetite for knowledge with which they are endowed. pg 145

for whatever the natural gifts of the child, it is only so far as the habit of attention is cultivated in him that he is able to make use of them. pg 146

No work should be given to a child that he cannot execute perfectly, and then perfection should be required from him as a matter of course. pg 160

An idea is more than an image or picture; it is, so to speak, a spiritual germ endowed with vital force – with power, that is, to grow, and to produce after its kind. It is the very nature of an idea to grow. pg 173

professional teachers, whether the writers of books or the givers of lessons are too apt to present a single grain of pure knowledge in a whole gallon of talk, imposing upon the child the labour of discerning the grain and of extracting it from the worthless flood. pg 175

Direct questions on the subject-matter of what a child has read are always a mistake. Let him narrate what he has read, or some part of it. He enjoys this sort of consecutive reproductions, but abominates every question in the nature of a riddle. pg 228

the question is, not how many things does he know, but how much does he know about each thing. pg 275

The wonder that Almighty God can endure so far to leave the very making of an immortal being in the hands of human parents is only matched by the wonder that human parents can accept this divine trust with hardly a thought of its significance. pg 333

It is better that children should receive a few vital ideas that their souls may grow than a great deal of indefinite teaching. pg 346

Why I recommend the Kindle version for Charlotte Mason’s books

I usually prefer print books in general, but with the antiqued language, the built in dictionary is highly valuable. There’s also a lot of talk of many of print books being rip offs of other online versions, and the books that aren’t (with the pink covers) are known for having poor bindings.

Do as you wish, but my two cents is that the Kindle version of the books is both more economical because the print books can shoot up in price pretty drastically, and it’s a better investment if you want to reread them and use them as reference books.

Do you have a favorite Charlotte Mason quote?