Middle Way Mom uses affiliate links in posts and sidebar ads. Please refer to my Disclosure Policy for more information.
You are here: Home / Homeschool / The Effect of Learning Logic 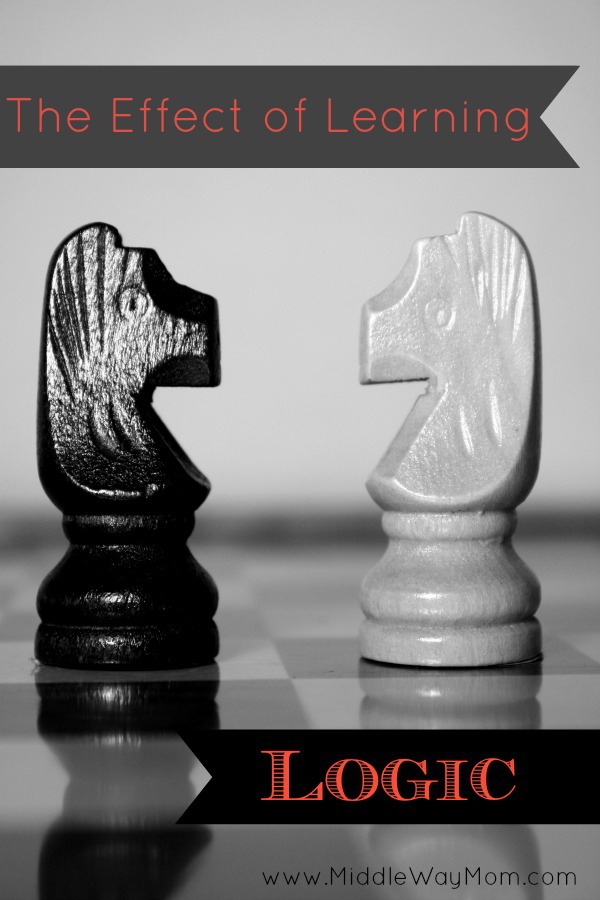 I love The Well-Trained Mind

and their focus on logic and rhetoric, but there’s something about studying logic that ruins you in some ways and builds you up in others! It’s true. When you open up the floodgates to learning logic, there’s no going back.

I should say, I love logic. I seriously get excited when it is time to sit down together and do Care Bear’s logic lesson together. With that said, after you start learning all the informal fallacies, you see them everywhere! I was already thrilled I didn’t have my eyes littered with political ads over the 2012 election season since we don’t have a TV signal in our home (though, Mitt Romney had ads on Words With Friends… seriously? Gr.). I’m even more grateful that I didn’t learn logic, then see those ads. You wouldn’t want to sit at the same dinner table with me, let me tell you!  What about friends or family who try to convince us their way is better? And arguments with others where they use the distraction technique to get us away from our (hopefully) valid point?

Logic has ruined me from giving validation to arguments of others when they use logical fallacies for everyday points. (I suppose that’s not that bad, though, huh?) I honestly am starting to believe that constructing a fully logical argument these days is a rare occasion we can not count on. It’s easy to see why logic is not recognized or valued when we witness the media’s portrayal of a convincing argument. Obviously advertisements are a big perpetrator, but even the news doesn’t always give valid arguments. How are we then to come to reasonable, logical conclusions?

Focus on the issue

Deflection is the sword of the weak, and many prove to be weak. Simple practice in the daily lessons to find fallacies sharpens the mind to find deflections and other common tactics. I’ve gotten much better at noticing when someone tries to change the subject, or deflect arguments back in order to avoid dealing with the actual point. While some people use deflection as a coping tactic, others do it intentionally. Either way, when a point is bought up, it should remain in focus rather than jumping around to any issue that is brought up. I see people do this in relationships all the time! “You made me mad because XYZ.” “Oh really? You can’t talk because you did ABC!” Sound familiar?

Many of the fallacies reminded me of arguments used against Islam, and how they are faulty to the core. We got to talk a lot about the arguments used, and why they are lacking credibility. Walking away from each lesson felt like an iman (faith) boost! Alhamdulilah, what a great feeling to strengthen faith in the place where so many people claim to lose faith. It is easy to see the miracle of the Qur’an when you look with a logical eye.

I’m not saying everyone needs to be logic pros, but I do hope that more people start learning the art of logic so we can continue to move forward rather than resorting to underhanded arguments and calls to emotion.

Do you teach logic in your homeschool? Do you find value in it?

This article was rewritten from a previous post, originally posted in December 2012.