Middle Way Mom uses affiliate links in posts and sidebar ads. Please refer to my Disclosure Policy for more information.
You are here: Home / Islam / What is a Muslim Woman? How Does Hijab Fit? 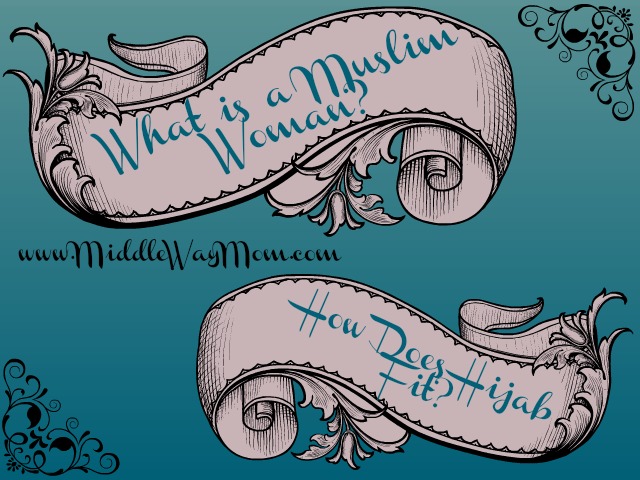 World Hijab Day is coming up on February 1st, and it brings up the question: What is a Muslim woman? Does hijab make or break her identity? What else identifies a woman as a Muslim?

Everyone’s answer will be different, and I think it largely has to do with their worldview and their influences. My view will be different than yours, I’m sure. My view doesn’t mean that I look down upon those who do not walk in the path I describe, but rather it’s the journey I wish to walk myself, in sha Allah.

So, when I think of who I want to be as a Muslim woman, I want to be kind, gentle, yet assertive. I want to be highly educated, driven, and focused. I want to be modest and able to stand up for myself when needed. I want to be dependent on my husband yet completely able to be independent if needed. I believe this is how the wives of the Prophet Muhammed (peace be upon him) lived, and I pray that by the time I die, I will walk in a similar fashion.

I believe hijab is an important reminder to myself to live in such a way, and I believe it’s one piece of the bigger puzzle of a Muslim woman. If one lives the epitome of Islam in her life, hijab will be included. This is why I believe it is important to aim for, and try to wear hijab.

Hijab does not only include the scarf worn around a woman’s head, but it extends to modest dress from head to toe along with modest actions. Living with hijab means there is no flirting for fun with random men, being vulgar in public, and not backbiting those who can not defend themselves. Living hijab is more than wearing a scarf on my head, but the scarf is that reminder every time I adjust it or look in the mirror of how I want to act.

For those who are not Muslim, I would love to hear your experiences if you choose to take part in World Hijab Day! I’ve worn hijab for over six years now, and I’m still surprised sometimes at how people view me. Very often I’m seen as a foreigner, even after people know that I’m not. People equate me with diversity when on paper I’m just part of the sea of Scandinavians in the midwest. I’m whiter than most people you’ve met, but most assume I’m not from “here.” It’s been quite a change to lose my Caucasian identity when I put a piece of cloth over my hair. I’m no longer one of “us,” but now I’m one of “them.”

It’s okay though. I like being one of “them” when it means a woman who is not harassed for her shape or expected to be cool with strip clubs. I’m fine being in the group that doesn’t drink, doesn’t gamble, and chooses virtues over dollars. I’ll be one of “them” if it means I raise my kids without thinking it’s cute to have boyfriends and girlfriends in elementary school.

Muslims aren’t alone in this lifestyle of hijab. We just show our lifestyle visibly, and that’s why hijab is emphasized.