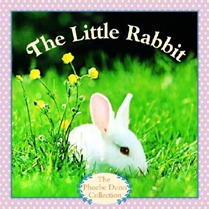 The Little Rabbit is an adorable book, and I’m glad Before Five in a Row uses it and I have been introduced to it, and other books in the series of little animals. Little Miss really enjoys reading about the baby animal, watching it grow up, and comments on the pictures throughout. As with the other BFIAR lessons, there is the Bible component, and so I’ve provided a supplement, along with a couple other ideas.

“Whoever is merciful even to a sparrow, Allah will be merciful to him on the Day of Judgment.”

Unfortunately I had a hard time locating which hadith collection this can be found in, but I’ve found it on various reputable websites. In sha Allah, if there is a mistake, I take responsibility. We know the Prophet (sws) was kind to animals and spoke of the benefit to being kind to animals through various stories. Many of them aren’t entirely appropriate for preschool age kids as they talk about slaughter, or the level of sin of a person, so that’s why I’ve opted for a hadith that lacks the exact sourcing.

In the story, we watch the little Rabbit grow up, and meet another animal different than it. There are lots of people that look different than us, and we are told to remember that our color or race does not make us better or worse than anyone else.

O mankind, We have created you from a male and a female and have made you into nations and tribes for you to know one another.  Truly, the noblest of you with God is the most pious. Truly, God is All-Knowing, All-Aware. {Quran, 49:13}

What does pious/piety mean? What are some things someone would do to try to become pious? Who are some pious people you know that you can look up to? (The Prophet should be one example)

Enjoy the book and the other lessons brought up on Before Five in a Row. It really is a wonderful book to work through with your child and intentionally bring lessons out of adorable and rich stories, in sha Allah.