I just so happened to get some Babyland diapers for a super cheap price (I think $10 for 3 brand new, in the wrapper diapers) from a mama on diaperswappers.com. Babyland diapers are not very well known, so she was having a hard time selling them at her original asking price. I figured even if they were terrible, I’d only be out a few dollars each. 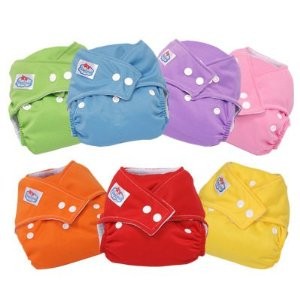 These Babyland diapers are pockets with PUL outer layer and microfleece inner layer. Upon first receiving them, I honestly didn’t have very high hopes for the durability of the diapers. I noticed some of the seams could be straighter, and wondered if the PUL was going to stand up to multiple washing and running through the dryer.

Well, I was pleasantly surprised how durable these diapers are, and how easy they are to take care of! I’ve stayed away from pocket diapers partially because I’ve heard how easily it is for the microfleece to get stinky. Again, I was happy to be wrong! I’ve fallen in love with these diapers, and have started rethinking my AI2 (all-in-two) commitment.

The Babyland diapers fit my 27 lb toddler, Little Miss, beautifully and we have never had a problem with leaking. The elastic has held up very well so far (about 6 months), and that’s with running through the dryer in almost every wash. The microfleece is soft and comfortable against her skin, and I actually turn to the Babyland diapers if she is having an issue with a diaper rash.

The Babyland diapers I received did not come with inserts, but I have inserts already from various sources. I’ve stuffed the diapers with prefolds, boosters, AI2 inserts, and pocket inserts I acquired from random sources, all working really well. Obviously, what the diaper is stuffed with makes a huge difference in how slim the diaper ends up, and with the main diaper very slim, this can be a very trim option.

Overall, I would highly recommend Babyland diapers, especially given the price! I’m looking forward to buying more in the future and supporting this growing business.