Middle Way Mom uses affiliate links in posts and sidebar ads. Please refer to my Disclosure Policy for more information.
You are here: Home / Parenting / Saying No to Your Teenager (Thoughtfully) 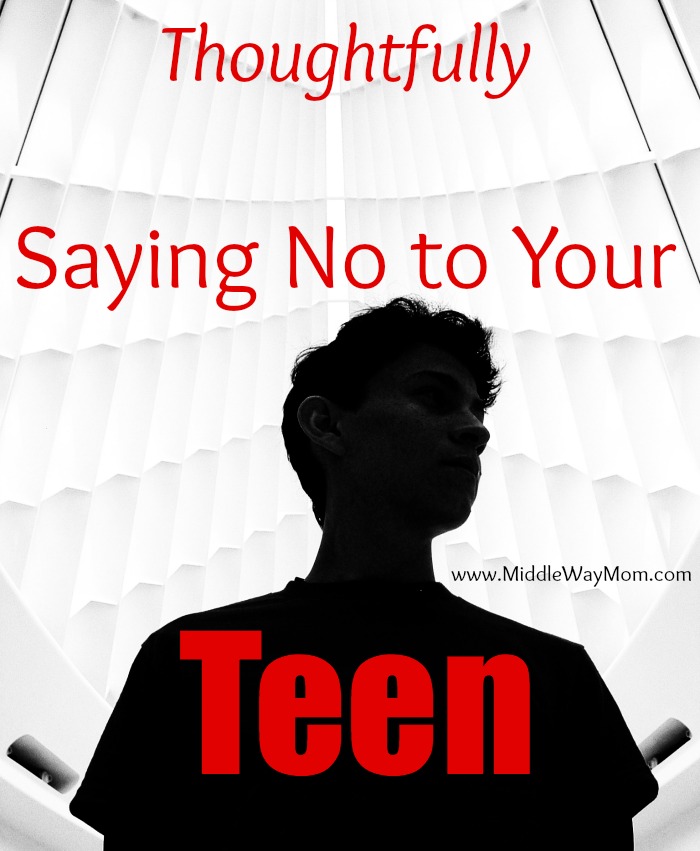 When you have a teenager, how do you balance between giving guidance and giving freedom? When do you pull the “Mom Card” and put your foot down? Sometimes, teenagers have to be told no.

A teenager really does have a good amount of decision making power, and should be encouraged to use it! They should have practice in making those decisions and thinking about the longer term effects of their actions. Talk through the situation and decide together whether it is a good idea or not. Often times when Care Bear is asking if she can put off her work until later, we talk it through, and we decide together. There have been times that I’ve reminded her of her other commitments, so she won’t actually have time to finish things later, and other times she tells me her plan and I agree. Decision making in the teen years is not a one way street.

As a parent, you have veto power, but it loses its significance if you use it often. Really, you have to decide, “Is this situation going to make a big negative impact now, or later in life?” If the answer is no, then give guidance and suggestions, but a downright no should be reserved. Care Bear was asked to go to Florida with a friend at fencing – a boy who happens to have a crush on her. Uhh, that’s a flat out no way. There’s no discussion, no negotiations, it’s just NO. In fairness, Care Bear really only brought it up in jest since she knew there would be no way it would happen. Our boy policy is pretty strict, and this is so far past the line, it’s humorous!

How to say it

I remember when I asked my mom if I could go to Mexico for spring break with my boyfriend. Oh, she laughed, and laughed and laughed as she told me no. I was hurt. I felt stupid. I felt ridiculed. Now, as a mom, and can see how that would just fall out of my mouth, too. I have to be very intentional with how I say no. Every single time, without exception, I try to explain why the answer is no. There have been many times that my teen still doesn’t agree, but at least I’ve stated my argument.

When they ignore you

And you know what? There have been a number of times that after I’ve said no, she did it anyway, and she came back saying, “I now understand what you meant.” I’m not happy she decided to ignore what I said, but now there’s some life experience under her belt, and sometimes, just sometimes, she sees I know what I’m talking about.

Do I freak out if she goes against what I said? I try not to. I’ve told her that I will reserve yelling for when she lies. If she lies about it, then yelling is just part of the punishment, and it’s not fun, for anyone. Also, since she spends a couple days a week at her non-Muslim dad’s house, I just don’t have control over a lot of things in her life. I just have to accept that she will be presented with things that make me cringe, and there’s nothing I can do about it. With that, I have to realize there will be times she will be disobeying me and obeying her dad in the same action. I have to keep my cool.

I can’t force my decisions upon her, and I have to reserve being stern for areas that are extremely important. For everything else, let’s talk.

How do you handle saying no to your teenager?