It’s that time of year for unveiling our curriculum! Starting last year I decided to do things a bit differently in that I am revealing the curriculum we used last year. I’ve been doing the curriculum posts long enough that I’ve seen the major differences between the plan and reality. So rather than unveiling the plan, I’ll break down what curriculum we actually used in our Charlotte Mason homeschool. We have just wrapped up Grade 1 (Form 1B) after our first year being all-in with Charlotte Mason. 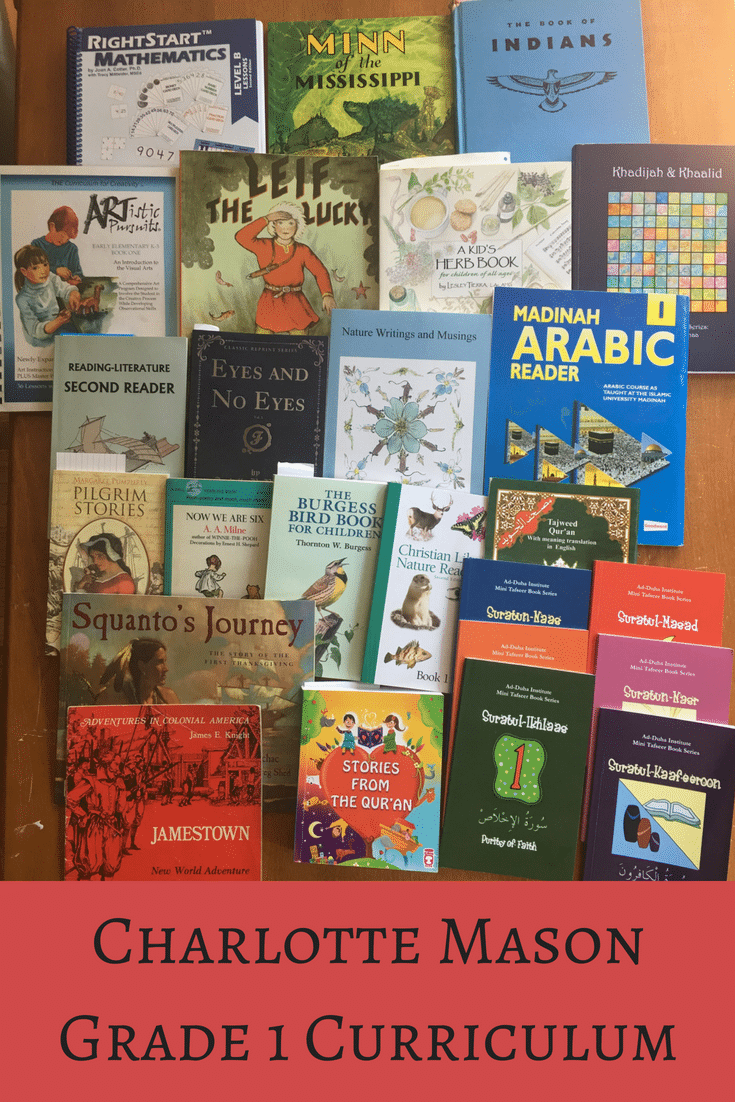 We went back and forth with math this year and came back to tore.rightstartmath.com/rightstart-mathematics-level-b-second-edition-book-bundle/” target=”_blank” rel=”noopener noreferrer”>Right Start Math, Level B. I can see us using this indefinitely. After trying out a few different curriculums, which were also fantastic, I just love the abacus and think it’s an incredible teaching tool for math. So, with confidence, I can tell you we are planning to use Right Start Math Level C for second grade.

I’ve been singing the praises of to/2MR3fKH” target=”_blank” rel=”nofollow noopener noreferrer”>Building Foundations of Scientific Understanding for a little while now. The downside is it requires a little bit of prep work, a lot if you want to get fancy with activities, but we generally just do a journal entry with each lesson. Each lesson includes open ended questions to get the child to reason to the conclusion on their own, so instead of a lecture or required reading, much of the knowledge is gained via an inquiry-based approach and solidified with experiments. I love that all the science fields are covered, interconnected, and lessons build directly on each other so there is consistent review of concepts. As Charlotte Mason says:

“…you must not only fix his attention upon each new lesson, but each must be so linked into the last that it is impossible for him to recall one without the other following in its train.” – Volume 1 pg 158

There are suggested titles within BFSU to read up on the various topics via picture books, but I’ve found my Usborne Encyclopedias have most of what I need, and when a subject is still unclear, I use our Usborne science activity books to build on the topic.

There’s definitely a learning curve with the book, but there’s a Facebook group that is super helpful to get the most out of the book and get support from other parents who are using it.

I’ve covered much of our history when I talked about tory/”>decolonizing history, but this is the summary of what we’ve used:

I think it’s nine years now that we’ve used Ad-Duha as our core Islamic Studies curriculum. Their Mini Tafseer books are one of a kind, and the Perfecting the Pillars books are incredibly valuable at building a love of Allah through understanding tawheed and His 99 names. In addition, we read stories of the prophets one day a week, using to/2PD67th” target=”_blank” rel=”nofollow noopener noreferrer”>The Prophets of Allah series published by IQNA and to/2MA7hYA” target=”_blank” rel=”nofollow noopener noreferrer”>Stories from the Quran published by Timas.

In our Charlotte Mason homeschool, artist study is done once a week. We have used the tore/picture-study-portfolios/” target=”_blank” rel=”noopener noreferrer”>picture study portfolios you can get from Simply Charlotte Mason, adding one picture from the artist we are studying each week to our collection on the wall of our school room. When we change artists, we remove all from the current artist and start over. This year we covered Van Gogh, Monet, and Turner because they are all landscape painters and we do not put up images of animate objects in our home.

As the years go on, continuing to stay within the realm of landscape painters will be challenging. I have not decided if the study of art is reason enough to make an accommodation to our beliefs, as there is room for an accommodation for educational purposes.

Breaking from the Charlotte Mason method, I do have one lesson a week on art technique, using to/2o8EJ9Z” target=”_blank” rel=”nofollow noopener noreferrer”>Artistic Pursuits, Book 1. Aamina is, mashaAllah, a very creative person and I wanted to get more tools in her hands from an early age, but with some sort of direction in how to use them. So far she’s loved these lessons and she’s gained a lot of experience with different art mediums.

Geography has been quite straightforward this year. We do it two times a week – once using C.C. Long’s to/2Mw3aNg” target=”_blank” rel=”nofollow noopener noreferrer”>Home Geography for Primary Grades, and once using to/2PDrtXl” target=”_blank” rel=”nofollow noopener noreferrer”>Minn of the Mississippi. If I were to do things over again, I’d get the maps and possibly the curriculum from Beautiful Feet Books to go along with it, or just wait on the Holling book for a later year. A lot of the Minn book went over her head, but I do think she has a good picture in her mind of how the landscape around the Mississippi River changes from its start in Minnesota (which we visited this year, mashaAllah!) to its end in Louisiana.

I have to admit I’ve felt a little bit lost in trying to do natural history according to Charlotte Mason’s teachings, but I’ve tried to keep a couple nature lore books, and a special studies rotation each term. It’s also worth mentioning that I have substituted Building Foundations of Scientific Understanding for one of the natural history time slots in our week. Here’s what we’ve used, and the breakdown:

We started with the Charlotte Mason style reading lessons, but I found these weren’t as effective as I was hoping they would be. We took a break from that and used to/2o9uHFr” target=”_blank” rel=”nofollow noopener noreferrer”>Phonics Pathways after it being suggested by a couple friends. It seemed to do the trick in having step-by-step lessons with lots of practice (so much we actually skipped some of the practice in the lessons).

Now that Aamina has a stronger footing with reading, we use the to/2MMKQP4″ target=”_blank” rel=”nofollow noopener noreferrer”>Treadwell Readers for reading practice. She loves these books and always wants to read more.

Amatullah, my 5 year old, is currently working on to/2wxv3tx” target=”_blank” rel=”nofollow noopener noreferrer”>Jolly Phonics, like her big sister did. Since she’s only 5, I don’t require her to do any lessons yet, but she loves the one-on-one time with me, and she is a passionate lover of books already, so we’ve started with these easy and fun activity books. When she’s done, I plan to get the Primer of the Treadwell Readers and give the Charlotte Mason method of teaching reading another shot.

We’ve been reading from to/2o6LxVA” target=”_blank” rel=”nofollow noopener noreferrer”>The Blue Fairy Book by Andrew Lang this year.  Honestly, this is a subject that gets skipped often, but these tales are timeless and portray right and wrong in very clear light. Some are a bit dark and twisted (I’m told not to read Blue Beard at all), but a friend mentioned a good way to understand the purpose of fairy tales in that kids can grapple with these more challenging and dark areas of the world and their own lives by first grappling with them in stories.

Many of today’s well known stories are actually found in Brothers Grimm, and we read from this earlier in the school year. You’ll want to pre-read these stories before reading aloud, but there are some good stories in there… and some really dark and twisty ones that may not be good for young children to hear.

We are learning Arabic as our foreign language, and since it uses a different character set than English, I have introduced some writing elements to our instruction, contrary to the Charlotte Mason way, which is totally oral at this point.

For conversation and vocabulary, we use the to/2Pa8W43″ target=”_blank” rel=”nofollow noopener noreferrer”>Madinah Arabic Reader series. There are writing activities in this book that we do orally, until Aamina has completed Ad-Duha’s arabic curriculum, level B.

We also own Arabic readers that I find highly valuable, but Aamina said that it felt like too many new words being introduced at a time, so we’ve paused on those for the time being. I’m working on finding more ways to create immersion for the kids as my vocabulary is limited, likely through videos the kids can watch on their own.

Poetry is pretty straight forward with reading a bit each day, with a focus overall on a particular poet. This year we covered:

Aamina loved Maya Angelou and was sad when we started a new term and we were going to move on, but A.A. Milne has also won her heart. Both of us were happy to move on from Robert Frost after 12 weeks. He’s great, but just didn’t win our hearts like the other two did.

Admittedly, handicrafts has been something we’ve skipped more often than we’ve completed, but even with doing that, we’ve completed a few projects that have been very useful and fun.

I’m not the only one sharing my curriculum choices! Stop by the iHomeschool Network Back to School Blog Hop to read what other bloggers have chosen for their homeschool curriculum! 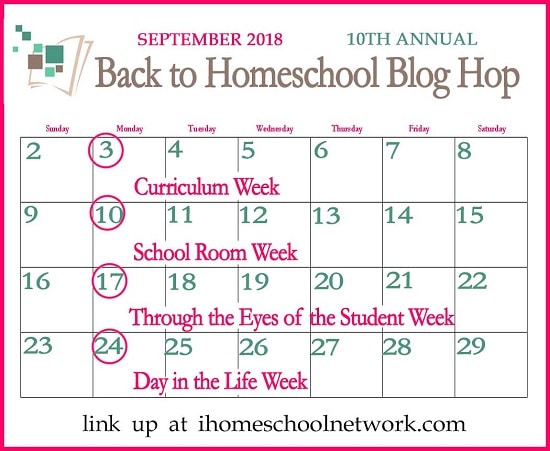