Middle Way Mom uses affiliate links in posts and sidebar ads. Please refer to my Disclosure Policy for more information.
You are here: Home / Homeschool / Homeschool Advice to My Younger Self

If I knew then what I know now… what would I tell myself? What would advice would I give myself when I got started on this homeschooling journey almost five years ago?

Our life was going through big changes when we decided to homeschool! I had just recently gotten married, then about two months later we both got laid off from our jobs. We had the same job at the same company, and they were removing the position entirely. Second honeymoon, anyone? Our honeymoon staycation was actually pretty sweet, funded on our unemployment benefits, and it also allowed us time to think.

Do we want to move up the plan for me to stay home? We planned on me working until we had a child together and when that child was two years old, I would come home before we tried for another. Well, there was no bun in the oven, but I was home anyway. Kira was starting to tread deeper in the waters of just fitting in with her peers, and her test scores were slipping from where they were previously.

Both were signs that school wasn’t walking her in the ideal direction.

Could I stay home and homeschool her? I didn’t have a lot of time to plan given I had no clue what I was doing, where to even look, or who to ask! I felt rushed to make a decision, and I had to convince her father that I wasn’t jumping off the deep end.

So… if I could sit down with my frazzled self, what would homeschool advice would I give?

Write down your thoughts

Whether it’s your thoughts when talking to people about your homeschooling decisions, things you want to look into further, or goals you intend to reach, write it down. Homeschooling has so many rabbit trails you can follow, it’s hard to keep up. Keeping a homeschool idea journal, or using Evernote (Evernote’s great to make sure things stay organized) is much smarter than counting on your brain to remember the top 5 curriculum choices for Math for the coming year, plus everything else!

Don’t let the pressure get to you

The first year I was probably the least patient of the years we have homeschooled so far because I felt this immense pressure to do well. We were walking into uncharted territory, and many family members didn’t think it was a good idea. That pressure turned into anxiety on my part, and less patience with Kira in her studies. As hard as it is, set the pressure aside, and deal with that at a different time. School is an experience everyone has to go through, and it doesn’t do well with a barking mom.

You will never please everyone

Some people (*cough cough* Kira’s dad) will argue with you just because they don’t want to agree with you. Don’t let him control the conversation and make you defensive. Stick with the facts. Learn to say, “What is it about this decision you disagree with? Which part makes you feel uncomfortable?” Narrow down issues and figure out if it’s really an issue, or just picking a fight.

Get agreements in writing early on

Homeschooling changes the dynamics of custody quite a bit. Now Kira’s spending a lot of time (and therefore meals) at my house, and I’m paying for a lot of day trips and activities. Get financial agreements in writing and notarized before it turns ugly. Lawyers are crazy expensive. Use a mediator before you need a lawyer. A verbal agreement means nothing when people get ticked off and choose not to abide by it anymore.

Learn to walk away

Sometimes, a math concept just doesn’t stick the first (or fifth) time it’s explained. If it’s really a struggle, put it down and come back to it later. You have time to make it up. No one is happy when you drill over a confusing concept for 30+ minutes.

It takes time to adjust to doing school at home when your student started school in a traditional setting. While we didn’t have a lot of wiggle room in the beginning since we started with a virtual school, I probably could have eased us into the new routine a bit slower.

The virtual school was setup for a lot of independent work for Kira in 4th grade. After the first quarter, I got used to taking the back seat and then had to back track when there was an issue. It’s a lot easier to continue staying involved rather than reestablishing it. Also, it was a bad habit not to check on Kira’s work when we started traditional homeschooling. No one was there to check her work but me, but I was used to it being done by the virtual school. It was a learning curve for me to take back the reigns.

What homeschool advice would you give to yourself if you could go back?

This post is part of an iHomeschool Network blog hop! See what other pieces of advice the iHN bloggers would give to their younger selves! 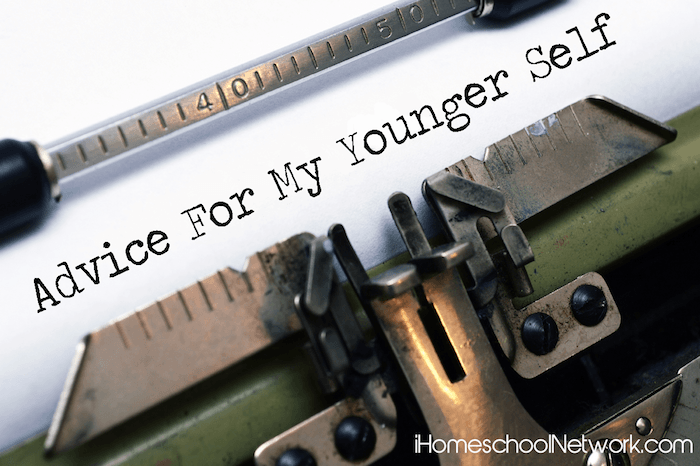